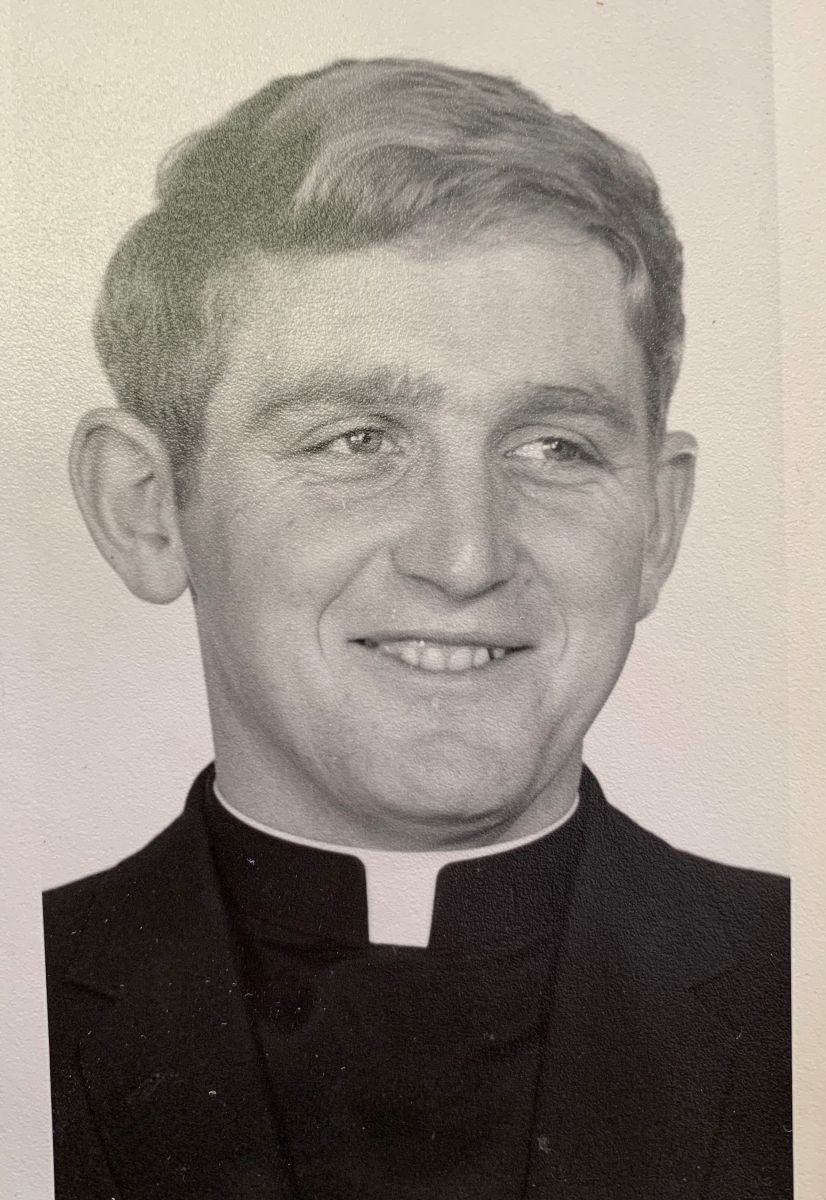 People would say of Fr Frank Young that he was a mixture of larrikin, “ocker” larrikin, serious thinker and warm-hearted friend.  He loved to portray a somewhat larger than life persona.  The motor bike and leathers, including his “chaplaincy” to the grand prix circuit at Phillip Island, the hard driving, the outdoor work, the gathering with cattlemen all created an impression.  This was topped up with a deep throated laugh that went on and on, a rumble from deep within. He always had some story of his exploits to share and he would laugh in the retelling.  The stories are countless.

At the same time, he continued to think about questions of theology and religious practice.  He would compare Catholic Christian faith with various Protestant positions seeking to understand these and uphold his own conviction.  He had a strong faith.

Frank attended the Cloverlea State School, along with a couple of other future priests in Peter Matheson and Frank Freeman, which must make that small school a vocational gold mine.

Later he boarded at St Patrick’s College in Sale where he learnt the rule of the refectory that leftovers after the first doling out of meals went to the other end of the table.  When Frank practised this rule of survival at the seminary and took his place regularly at the end of the table he became “Ender”; a nickname that stuck among his seminary confreres.

He was ordained in St John’s Trafalgar, on May 23rd 1970.  He served as assistant priest in Sale, Maffra and Leongatha.  He was parish priest in Omeo, Foster, Iona and Maryknoll and Maffra.  After 11 years in Maffra, and with his health causing increasing problems, he accepted the offer of retirement, choosing to continue to live in Maffra and celebrate or concelebrate Mass when he could.

The Eucharist meant a lot to him, as did the pastoral ministry of priesthood.  He loved to draw people in to the mystery celebrated and offered in the Mass.  He asked that certain scripture texts be used at his funeral.

This included lines from the “Bread of life” discourse in John chapter 6 where, after considering Jesus as bread in his teaching and his drawing us to God, we hear that he is the bread in his flesh given up.  His flesh was given up in death, and it is given to us in the sacrament of Holy Communion.  We can’t take all that in at once but in layer upon layer of teaching we are drawn to look to Jesus and listen to him for the message of life, and to celebrate his dying and rising in the Eucharist and receive the spiritual nourishment in communion.

This was at the heart of Frank’s life as a priest and he wanted his friends to consider it at his funeral.

He also recommended that we hear of the call of Jeremiah as a “child”; that image clearly resonated with him.  He sensed the irony of his own call in that he hardly fitted the template for a priest, and yet he believed or knew that indeed he was called.

Finally, he wanted it known that he would not be earning heaven by virtue of his own merits but receiving it by the good graces of God.

May his soul rest in peace and may we be blessed for knowing and loving him.

This obituary is an extract and adaption of the homily given by Fr. Peter Slater VG at Fr. Young’s funeral.