History of the Diocese

The Gippsland region was first settled in the early 1840s. It was initially served by priests on horseback from the Monaro region of New South Wales.

Sale was made a diocese on May 5, 1887, initially encompassing all the land to the east of the Bunyip River. The first Bishop was Irish-born James Francis Corbett, who had been parish priest at St. Kilda and Chancellor of the Archdiocese of Melbourne.

When he arrived in Sale on September 1st, 1887, there were only four priests in the diocese. All of them belonged to the archdiocese. There were no nuns, 16 churches and only seven schools. Three of the priests chose to return to the Archdiocese.

Bishop Corbett set about rectifying the shortage of priests and religious by sailing for Europe in 1889. He returned a year later with five young Irish priests and seven French sisters of Our Lady of Sion.

While in Europe, he also purchased church bells which were erected in a free-standing belfry in the cathedral grounds, statues of the Sacred Heart and Our Lady, Stations of the Cross and some well-chosen reproductions in oil of religious works by some of the Old Masters.

Under Bishop's Corbett's guidance, the diocese continued to grow with a succession of parishes and schools being established across the region.

After Bishop Corbett died in 1912 (aged 76), he was succeeded by Bishop Patrick Phelan. By this time, he inherited a diocese with a Catholic population of 13,000 - one sixth of whom lived in the cathedral parish and the rest scattered over 16,350 square miles (42,350 square km) of the province.

In 1913 he established the Sustenance Society for Sick and Inform Priests, which later became the Priests' Retirement Fund and more lately, the Priests’ Welfare Foundation.

Bishop Phelan saw the need to provide quality secondary Catholic education for boys and so set about raising £25,000 over three years to build St Patrick's College in Sale. This boarding school opened in 1922 and has been operated by the Marist Brothers since then. Although, it is now part of the co-educational dual campus Catholic College Sale, which also incorporates the former Our Lady of Sion Girls' School operated by the Sion Sisters. When Bishop Phelan died in Ireland in 1925, the parish and college were both free of debt.

The third Bishop of Sale was Bishop Richard Ryan who saw the diocese through the Great Depression of the 1930s, World War 2 and perhaps, the greatest challenge in the massive post-war growth and influx of refugees and migrants from Europe.

When Bishop Ryan died in 1957, he was replaced by Bishop Patrick Lyonswho oversaw a major change to the diocesan boundaries in 1959 with the inclusion of the parishes of Berwick, Cranbourne, Pakenham, Iona, Maryknoll, Koo Wee Rup, Dalyston and Korumburra.These areas were excised from the Melbourne Archdiocese.

While they were mainly rural areas at the time, those closest to the archdiocese have undergone rapid growth and are now outer Melbourne suburbs.

Fifth Bishop of Sale was Bishop Arthur Fox. Previously an auxiliary bishop in Melbourne, Bishop Fox took over in January 1968 and proved to be an accomplished administrator. He revamped the old Sustenance Society and renamed it the Priests' Retirement Fund which ensured that maintaining retired priests would not be a major financial burden on the diocese.

The initial planning for the setting up of the highly important Catholic Development Fund also took place during his time of office.

After his retirement in 1981, he was replaced by Bishop Eric D'Arcy who oversaw the first stage of modernising the cathedral, before being appointed Archbishop of Hobart in 1988. The Catholic Development Fund was established under his leadership in 1984

Seventh Bishop, Bishop Jeremiah Coffey undertook a major extension to the cathedral in 1993 and has also been responsible for overhauling the diocese's finances, appointing a business manager, setting up a finance committee, council of priests, diocesan pastoral council, diocesan executive and pre-paid funeral fund.

In 1999 he established the Bishop's Family Foundation and began an appeal to raise a capital base for providing welfare and charitable support for families across the diocese. All funds donated are held by the foundation and it makes an annual disbursement from its investments. To date around $1.2 million has been provided for projects aiding families.

In 2001, Journeying Together was launched as a process to establish a pastoral plan for the diocese to guide its development over the next five years.

The eighth bishop, Bishop Christopher Prowse came to the diocese in June 2009 after previously having served seven years as an auxiliary bishop of Melbourne Archdiocese. In 2012 he consolidated all diocesan offices at Sion House, Warragul, and the former Our Lady of Sion Sisters convent school (which was already occupied by the diocese's education office). The Bishop's Office, Catholic Development Fund, business manager and Catholic Media Gippsland moved from Sale, while the pastoral office, Marriage Tribunal and youth offices relocated from Newborough. The Warragul premises underwent a major extension and renovation to enable the move to take place and diocesan offices in Sale were later sold.

Bishop Prowse also initiated a major refurbishment of St Mary's Cathedral which included a new kitchen and toilets, repairs to failing cement render inside and out, and repainting. Shortly before he was appointed Archbishop of Canberra and Goulburn in November 2013, he renamed Bishop's Family Foundation as Trinity Families. 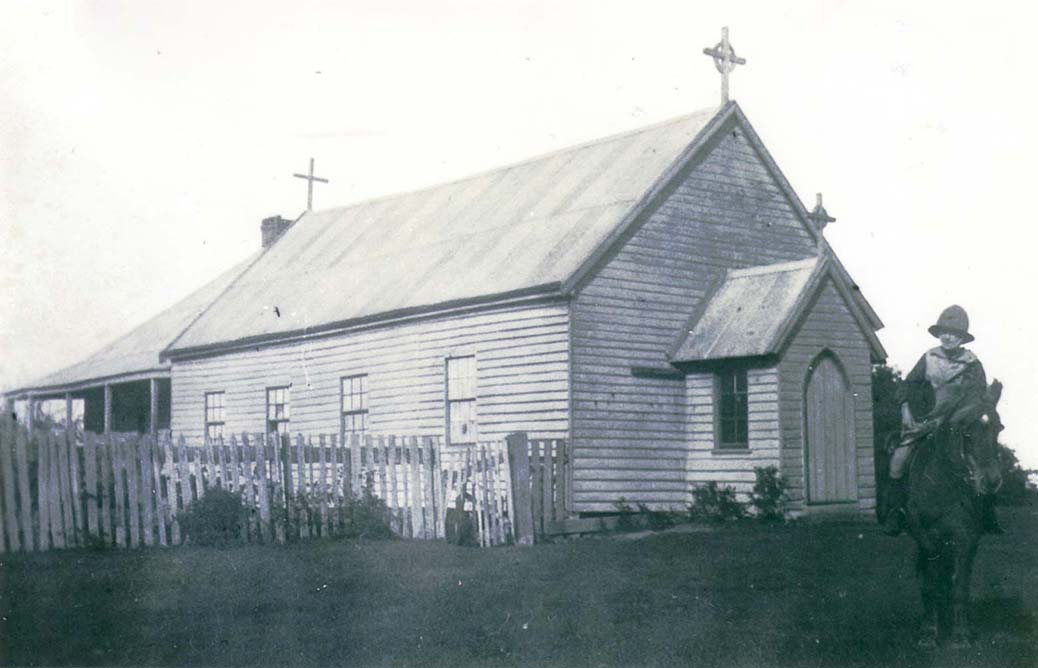 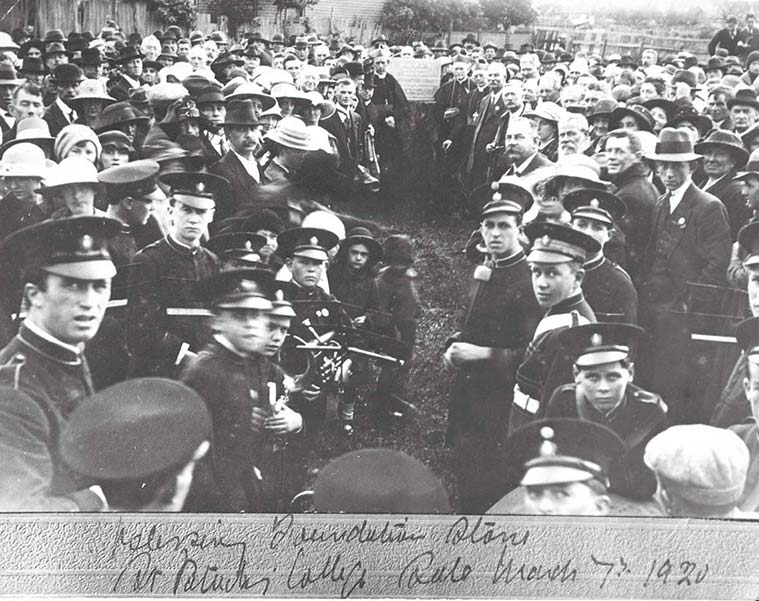 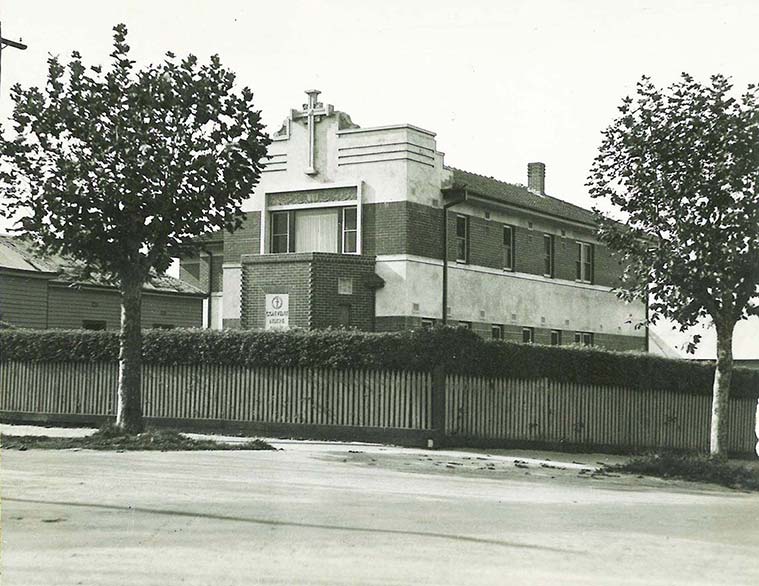 Sion House Prior To Rennovation 1950 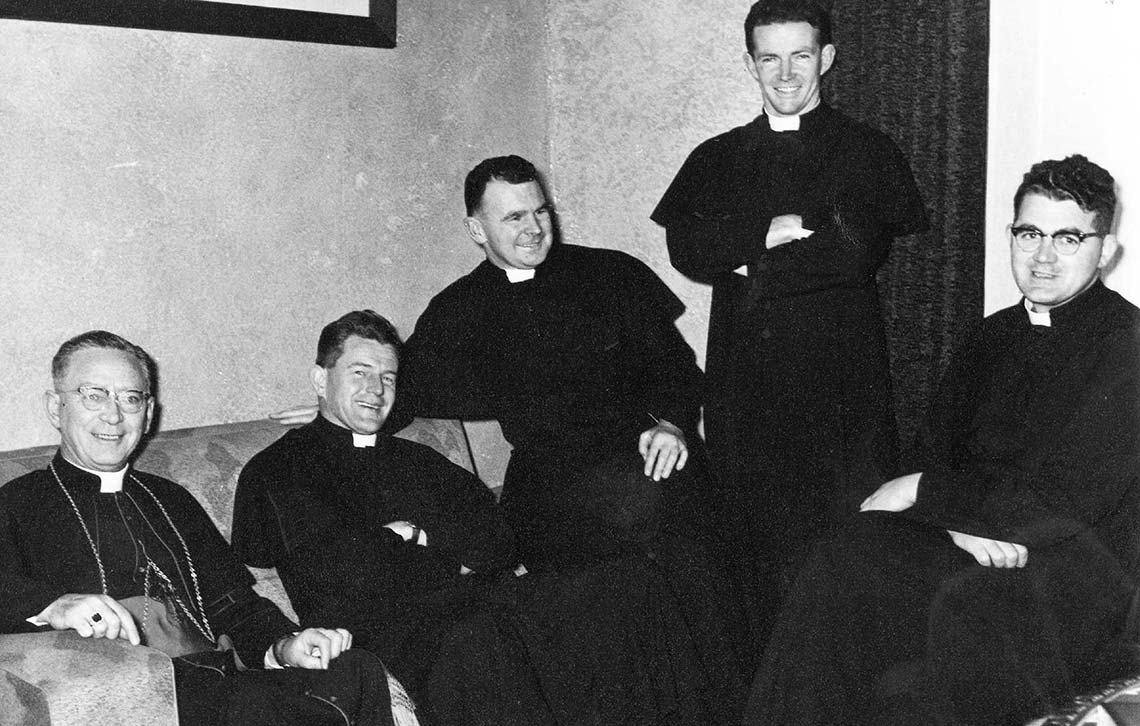 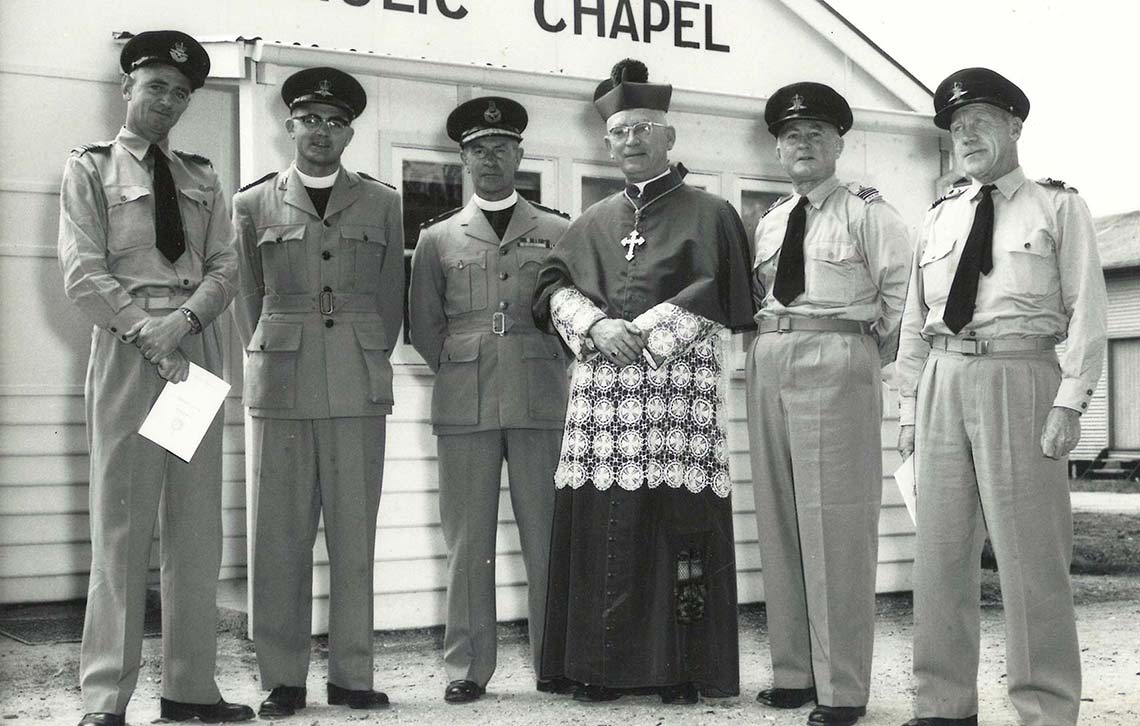 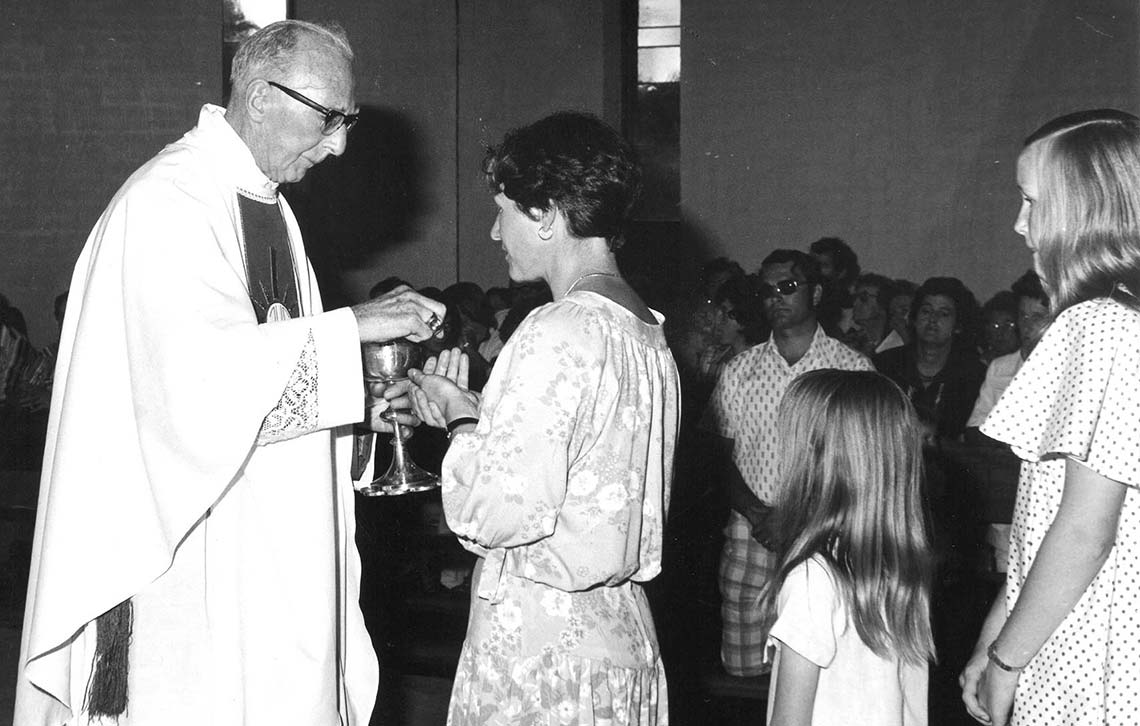 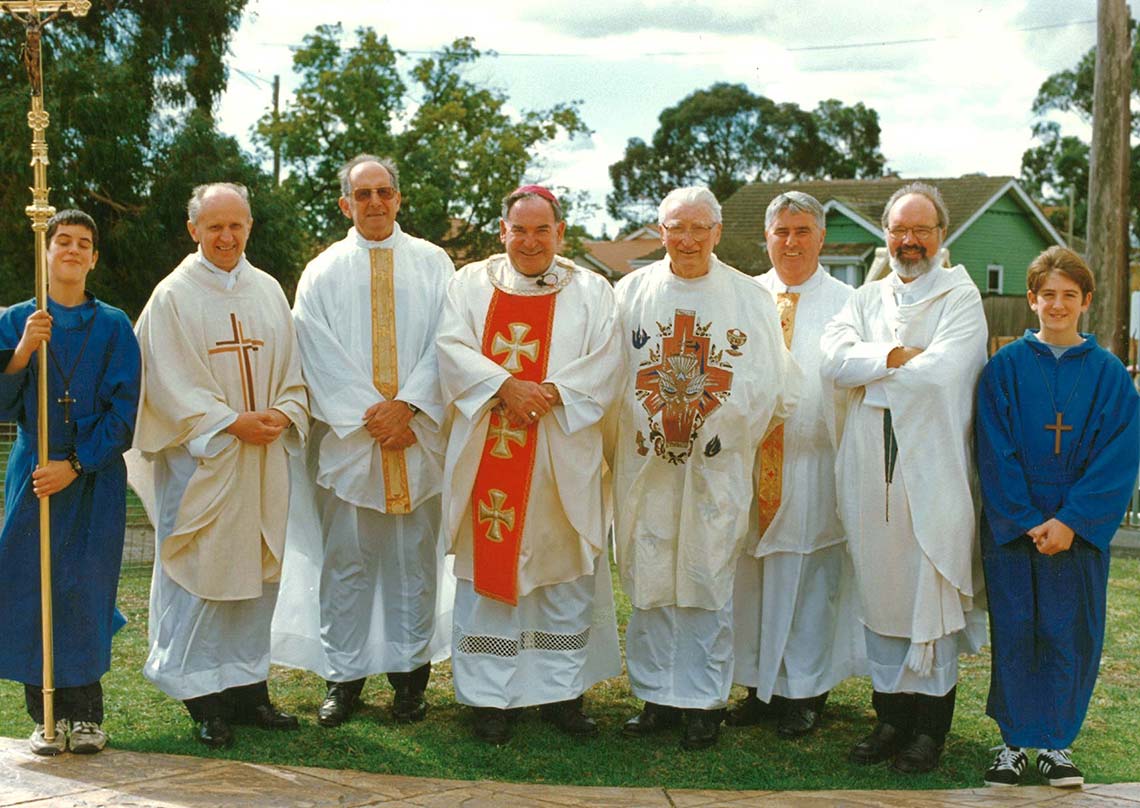 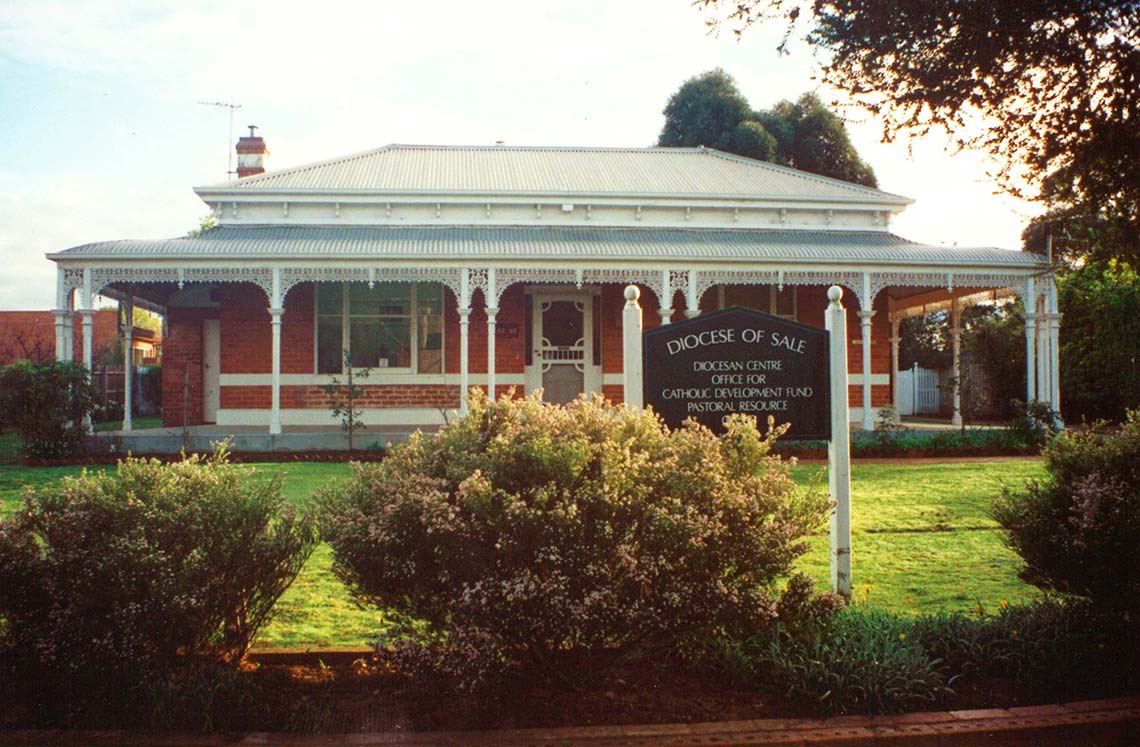 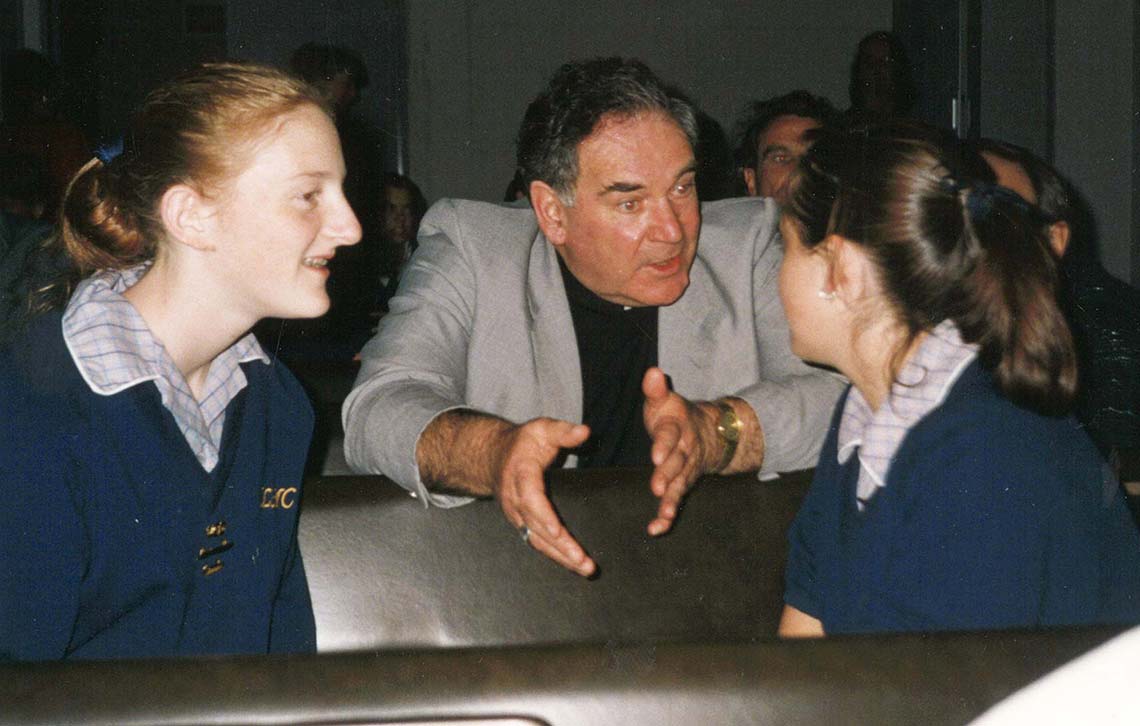 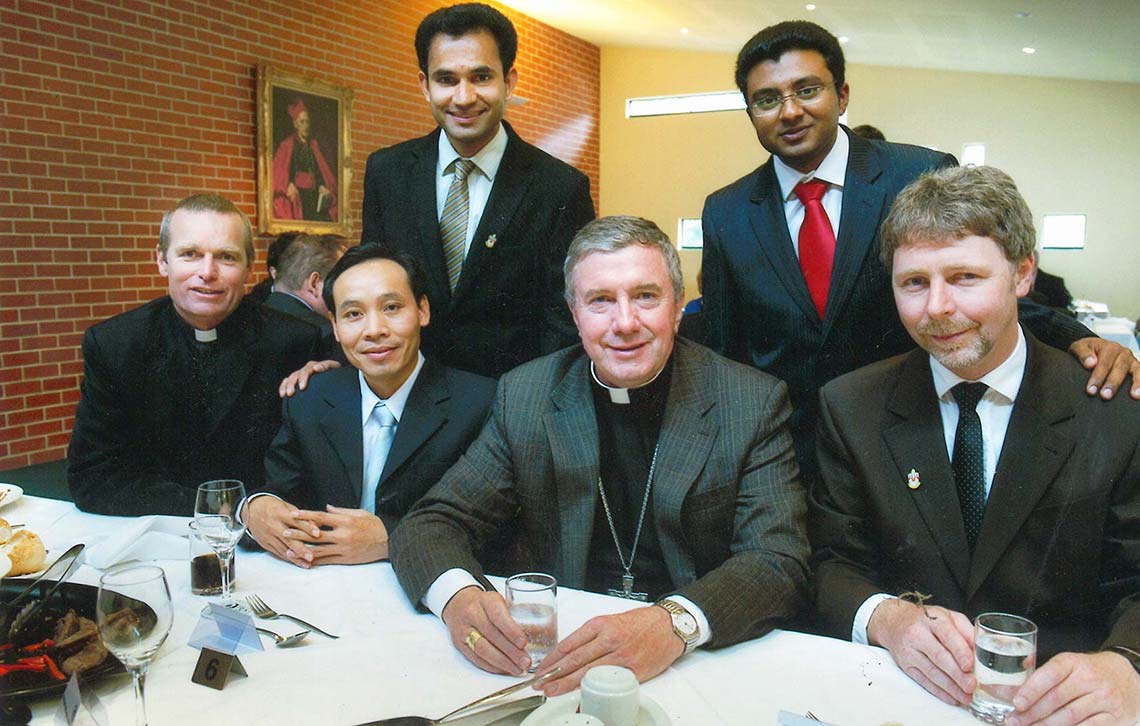 Dedicated to Our Lady of Perpetual Help

The main part of St Mary's Cathedral (with its distinctive east-facing Gothic windows) was constructed in 1886 by pioneer priest, Fr James Hegarty.

He initiated work on this red brick church when it was rumoured that Sale would become the seat of a Gippsland-based diocese. He wanted to ensure that the town had a church worthy of being called a cathedral

The first Bishop of Sale, James Corbett, brought back from Europe French-made bells for the free-standing belfry in the cathedral grounds, as well as statues of the Sacred Heart, Our Lady and Stations of the Cross.

In 1910 the basic rectangular building underwent major extensions which included a sanctuary, bishop's sacristy, priests' and altar boys' sacristy and Our Lady's chapel.

A Romanesque onyx high altar purchased from France was installed in the new sanctuary, which features impressive stained glass windows and a large statue of Mary Help of Christians.

A Blackwood chair, with a carved decorative canopy, was obtained and Bishop Corbett donated a polished wooden pulpit. This pulpit was later transferred to St Mary's Church, in the neighbouring town of Maffra. 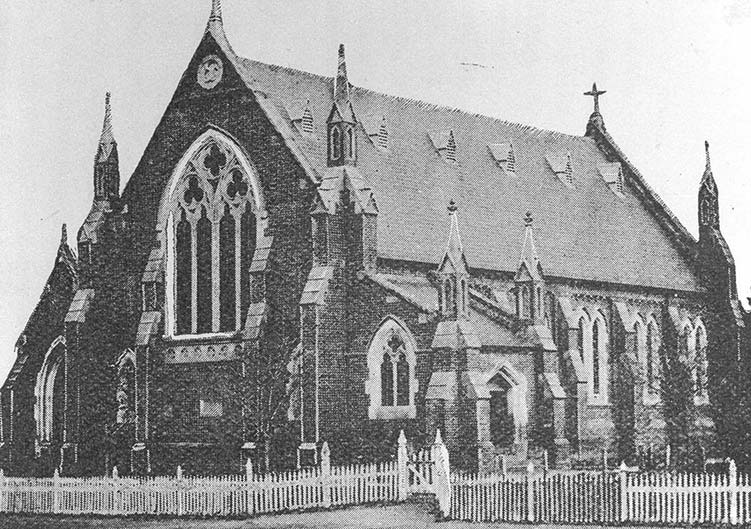 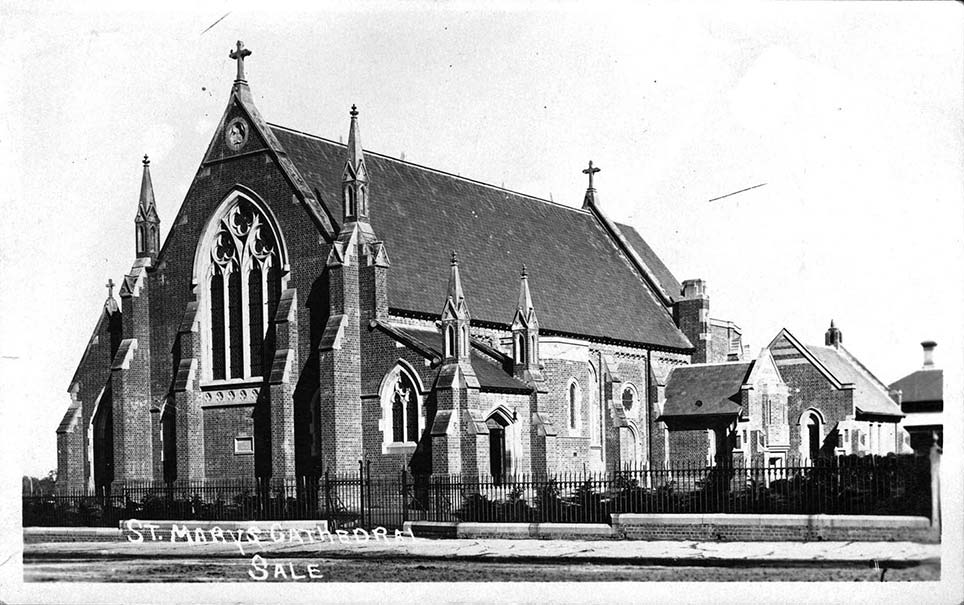 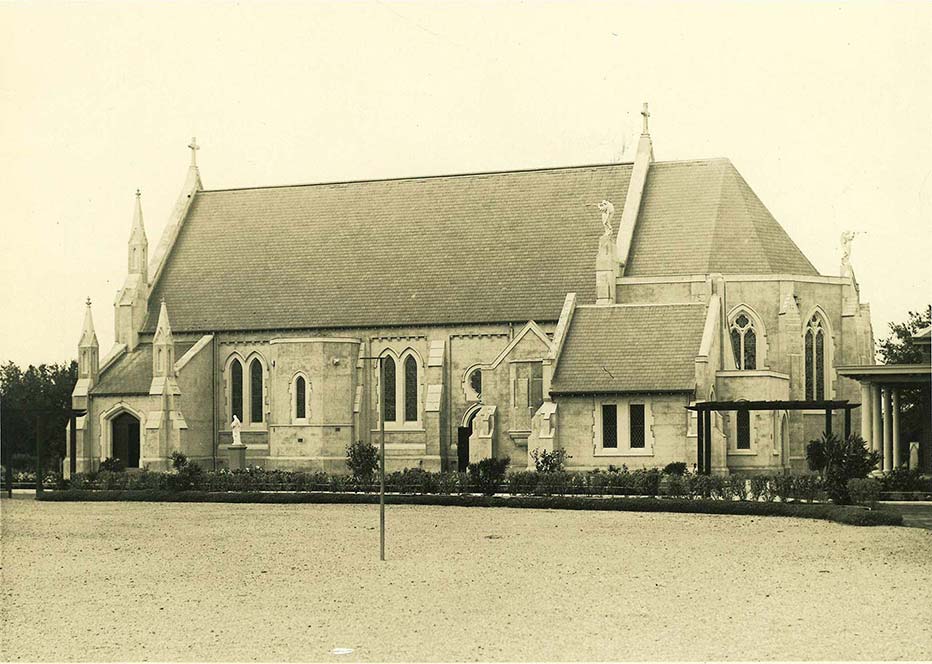 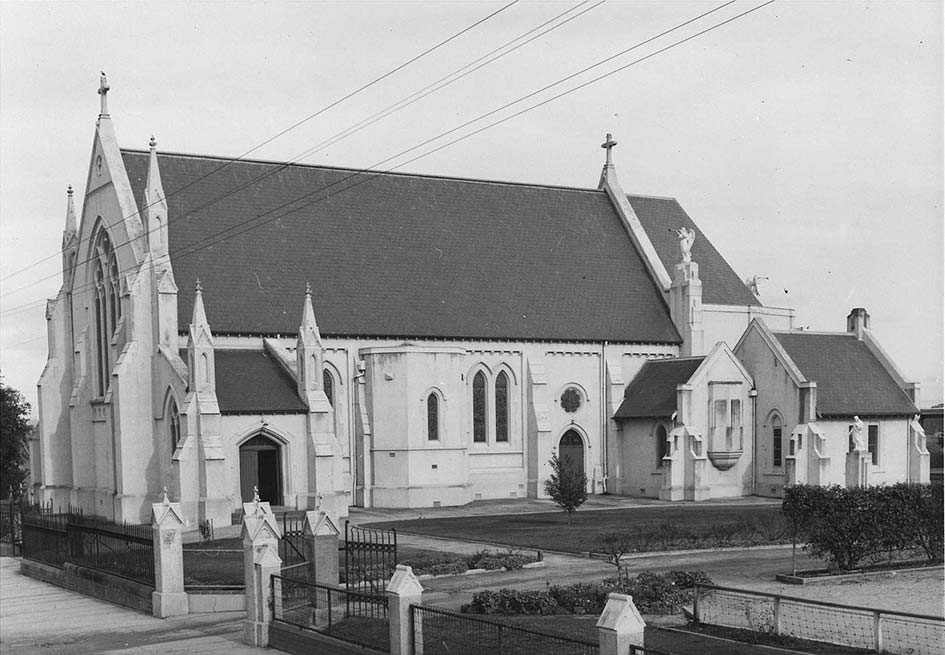 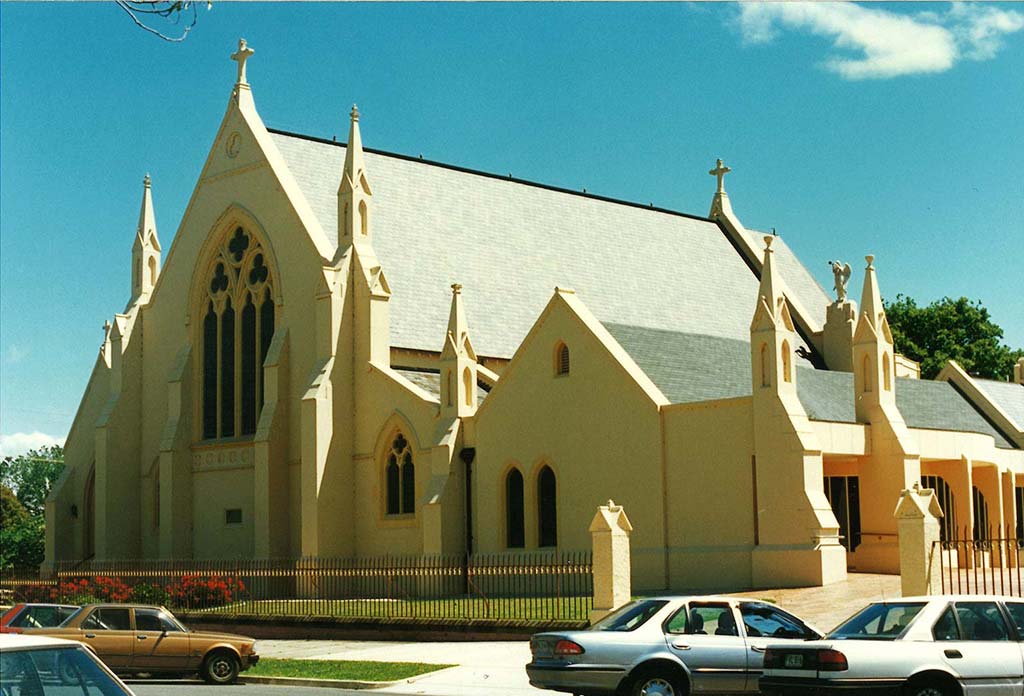 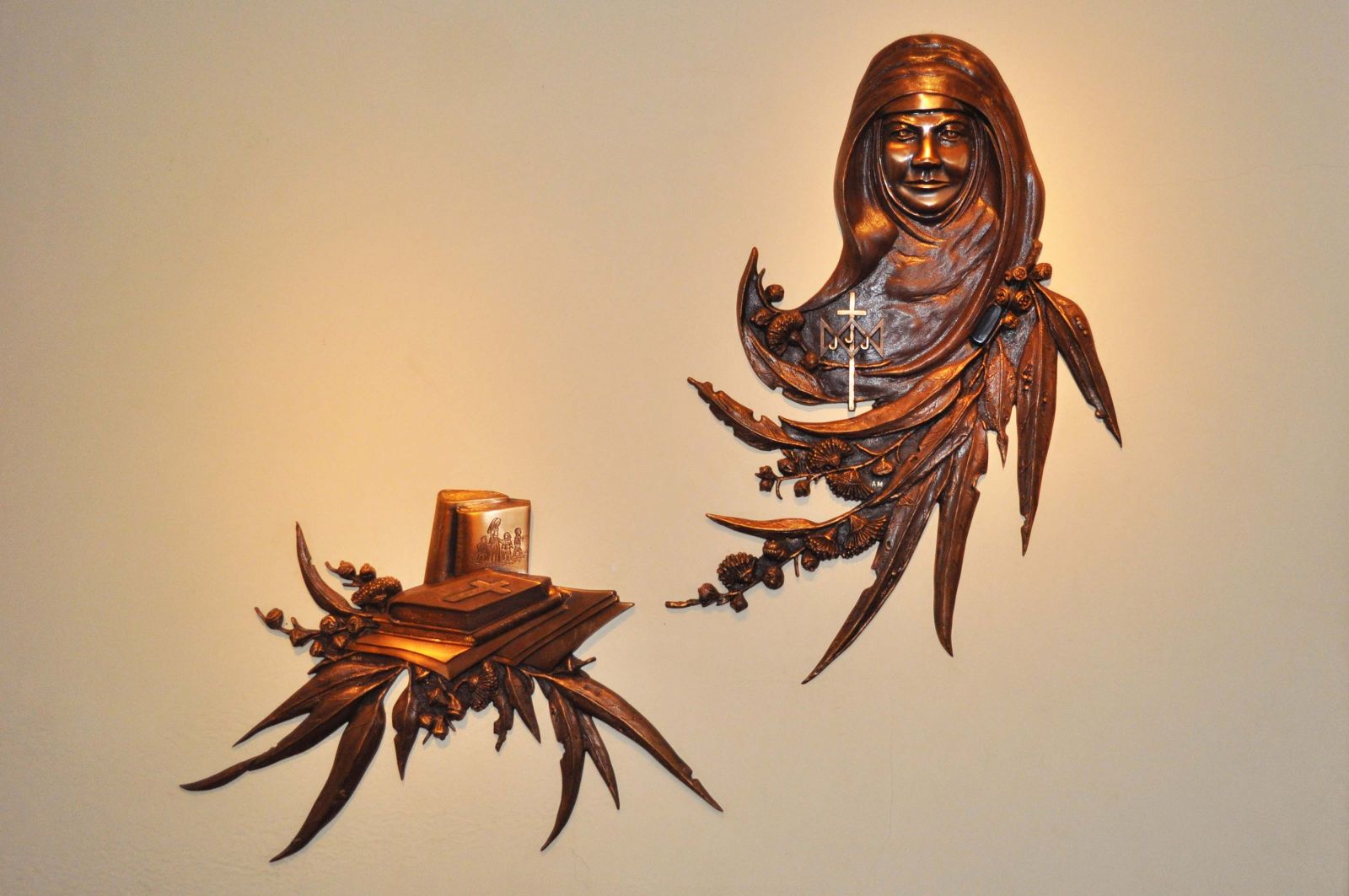 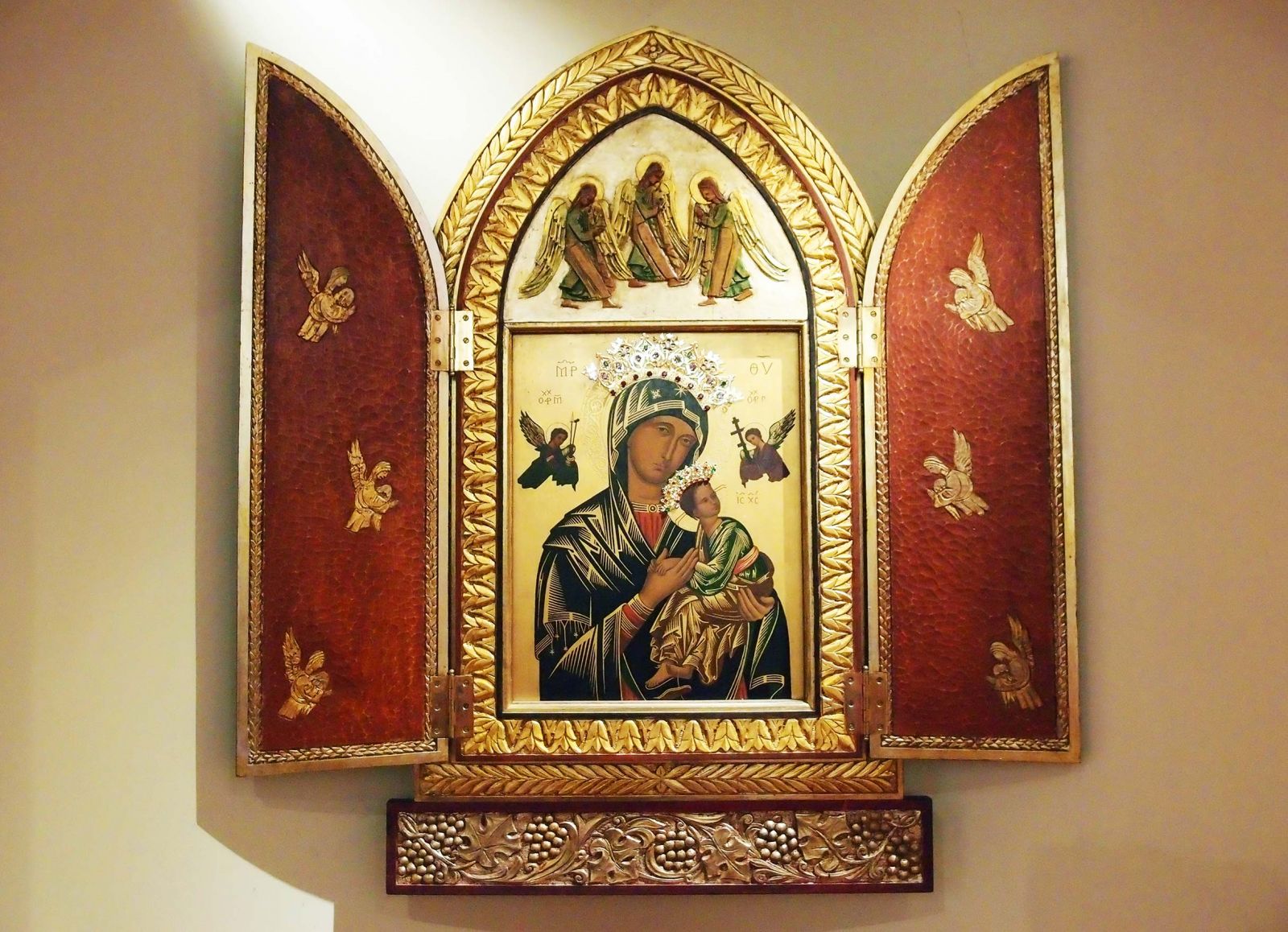 Shrine to Our Lady of Perpetual Help

In the 1930s the Stations of the Cross were relocated to St Joseph's Church, Korumburra, and were replaced by the present hand-painted ceramic stations set into concrete slabs.

Under the third Bishop of Sale, Richard Ryan, further additions were made including a high marble pulpit, marble altar rails and a mosaic floor in the sanctuary.

He also purchased three of the four angels which flanked the altar at the 1934 Eucharistic Congress in Melbourne and had these placed on the parapets of the cathedral.

At this time the old red brick building was also cement rendered and painted.

Few changes were made over the next 50 years until the sixth Bishop, Eric D'Arcy renovated the sanctuary area.He did so by removing the high pulpit, altar rails and having the canopy removed from the bishop's chair.

Four marble tablets depicting the Gospel writers, which had been on the high pulpit, were placed across the front of the altar.

The next major change was carried out in 1993 under the seventh Bishop, Jeremiah Coffey. This included the assembly area extension on the north side with its curved glass windows.

Our Lady's chapel and the northern confessional were demolished to make way for the extension.The tabernacle was cut down in size so that it no longer dominated the centrally placed statue of Mary and the high altar was brought forward to become the main altar.

The tablets of the Gospel writers were relocated to the wall flanking the bishop's chair, the floor level of the sanctuary was raised considerably and carpet was placed over the mosaic floor.

A new Shrine of Our Lady was built to give prominence to an icon blessed by Pope Leo 13 in 1890. A bronze bas-relief of Blessed Mary MacKillop by Annemieke Mein was placed in the foyer and draws many visitors to the cathedral. The sculpture features a small piece of wood from Mary MacKillop's coffin, sealed under epoxy resin.

Other works included reducing the width of the wooden pews, repairs to the slate roofing tiles, improved drainage in an effort to combat rising damp, construction of internal toilets and a small kitchenette.

The cathedral contains the remains of four of its bishops. Bishop Corbett lays in the main section of the church beneath the front rows of pews on the right hand side. Buried in Our Lady's Shrine are Bishops Richard Ryan, Patrick Lyons and Arthur Fox.

Following an extensive assessment of the condition of the Cathedral, a restoration plan was launched in November 2010. Works needed to bring the Mother Church of the diocese back to its former splendour was estimated to cost around $1 million. Bishop Christopher Prowse launched an appeal to raise funds towards the restoration. The same evening a pictorial history of the Cathedral was launched Three Springtimes: Chronicles of St Mary's Cathedral Sale, by noted historian Peter Synan.

Following the move of the Bishop's residence and all diocesan staff to Warragul in July 2012, the cathedral has remained in Sale and is used by the Bishop for all major liturgical celebrations of the year.