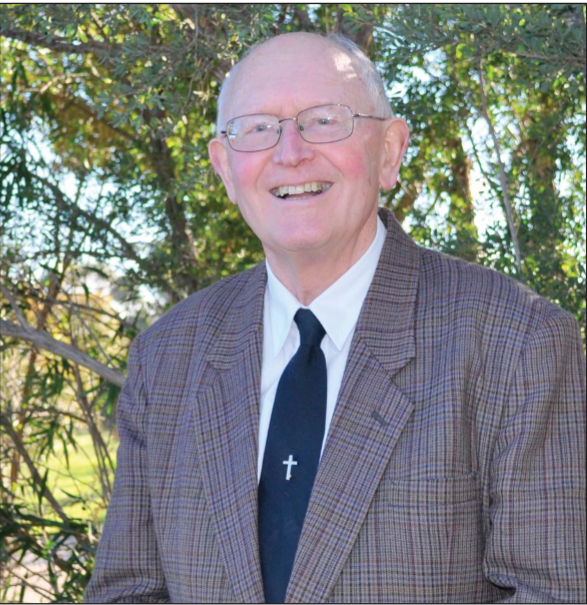 Passion for ministry, interest in people and desire to do good for them, along with a zest for life, were hallmarks of Fr John O’Kelly.  Born in Brighton and raised in Sandringham, John was ordained on 27 July 1963.

He served in several parishes: Maffra, Sale and Bairnsdale as assistant priest; and Omeo, Newborough, Orbost, Iona/Maryknoll and Leongatha as parish priest.  He also served as part time and relieving priest in other parishes.  He combined a very good mind with a big hearted love for people which made him a good pastor.  He put much effort into celebrating the liturgy and preaching the gospel, inviting people into the mystery of God’s love for us and the call to respond in faith filled living.

John’s association with the diocese is even longer than his own lifetime.  His grandfather and grandmother were pioneering teachers in Warragul and Sale.  Two aunts were Sion nuns who taught in Sale and Warragul; and a third aunt also taught in Warragul. A sense of that history led to his transferring, while still a seminary student, from the Archdiocese of Melbourne to the Diocese of Sale.  He came to love Gippsland and perhaps East Gippsland in particular.

He cared deeply for the diocese and brought his gifts to serve in several capacities.  In the early years he inspired a generation of young people with the vision of the 2nd Vatican Council and their life within the church.  For some years he was involved in presenting marriage preparation courses.  With his engaging style he was a gifted adult educator.

When the council of priests stopped meeting and was replaced by general meetings of the clergy John observed that it was not effective; so he drew up guidelines for a new council.  These were accepted, and then he was elected to the position of chair.

Later he was inaugural President of the Priests’ Welfare Foundation.  In this role he sought advice about the capacity of the foundation as the option of retirement, or lesser duties, for priests began to be accepted.  Discovering that the resources weren’t going to be adequate he proposed a way for the fund to grow to meet the coming needs.  Priests owe him much for that as they are now well provided for in their later years.

In all these roles he combined a pastor’s heart with an active and capable mind, and the diocese benefitted.  He was great company; cheerful, happy and fun loving.  Many learned that if we had an issue John, with his sharp mind and good judgment, was a good person to run ideas by.

Another notable aspect to John was his great range of interests and knowledge.  He had a knowledge of geology and forestry which made him great company on travels.  He loved music, Gilbert and Sullivan especially.  He was an avid bird watcher.  He engaged in ham radio and enjoyed conversations with people in other parts of the world.  He loved trains and especially boats.

Beneath all this work and fun, he was a man of faith.  He was grateful for his family and could say that he couldn’t remember a time when he was not praying.

He passed away at Corpus Christi Age Care in Clayton. A Requiem Mass was celebrated at St Mary’s Church Bairnsdale on 17 January 2020, following he was buried in Bairnsdale.

May his soul rest in peace and may the Diocese of Sale be blessed for his faith and service.